Here's what a few of our customers have had to say about us.
Have a testimonial of your own to share?

If you’re reading this testimonial, you’re likely considering booking with Scott Carter. If that’s the case, you’re definitely on the right track!

After having a rough go at sheep hunting in 2019 – namely spending 40+ days and nights on guided hunts in the mountains without seeing a legal ram, Scott insisted we’d get a ram if we went with him. We were able to book with him, and what took place was nothing short of extraordinary. Long story short, a little over a week into the hunt my husband and I doubled on bighorn within 4 hours of each other. The experience was one for the ages. Scott has an incredible team and stellar hunting areas. When you couple that with hunters who are willing to work, who appreciate the journey, and who don’t quit, you have a recipe for success.

After our bighorn achievement, we returned to Carter Outfitting for whitetail and we had a fantastic hunt as well. Scott has a great area with lots of big bucks, and you’re sure to have a great time.

We fully recommend Scott’s outfit, and we’ve gained a lifelong friend. We’re looking forward to planning our next hunt with Carter Outfitting! 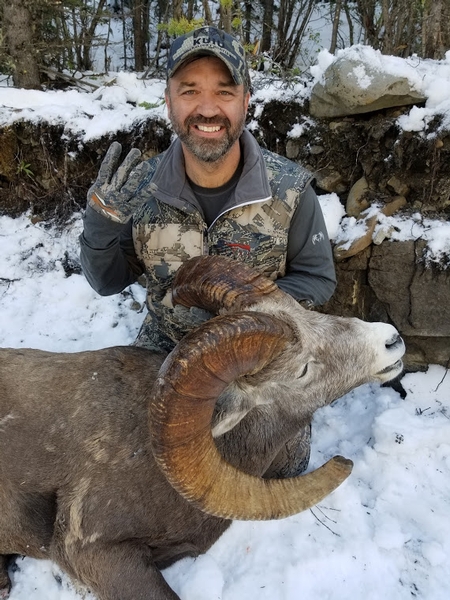 I have hunted with several outfitters & guides over the years, & Scott Carter & crew at Carter Outfitting are top-notch. After a failed attempt at my Slam with an outfitter who misrepresented almost everything about their unit, I re-learned a valuable lesson. Don't take chances with an unknown - especially when you train & spend hard on a sheep hunt. I got over it & called Scott Carter.

Scott committed to helping me get my Rocky/FNAWS if I would arrive mentally & physically prepared. Well, I did, & we accomplished a life-long goal, & I consider Scott a friend for life. Also, he is a truly gifted hunter & outdoorsman. We worked hard, & we had a great time on the mountain. I highly endorse Carter Outfitting; call me if I can help you with the hunt of your dreams! 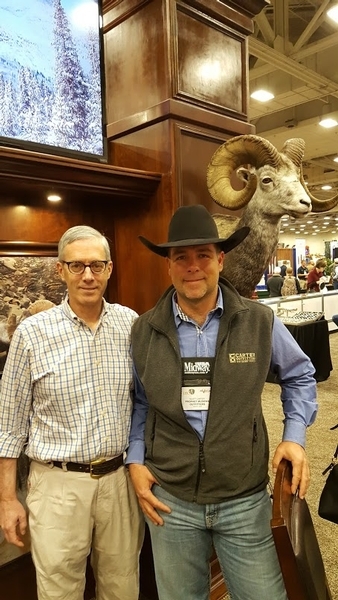 Any conversation on Scott Carter and his operation has to start with the word “Excellence.”  Please allow me to explain.

I have several traits that make sheep hunting extremely important to me.  I love marksmanship.  I love horses.  I love deep, raw wilderness.  I love having nothing but a canvas wall tent between me and 0 F and six inches of new snow.  I love being with men who share these traits.

Between 2004 and 2016 I paid my dues and raised and educated two children.  I also went on three Rocky Mountain bighorn hunts.  Those hunts had suboptimal outcomes.

In 2016 there was something about Scott and his family that told me to keep trying.  I had to have one more bite from the apple.  I arrived in Alberta for the last two weeks of the season –just like I wanted it.  Cold, dark, and snowy.  Into the depths of the Wilmore Wilderness the six of us went.  There were three guides, a wrangler who was good enough to be a guide, a fellow hunter and myself.  I could not have dreamed how great it would be.  There was always comradery.  Camp was full of good humor.

The hunting was often difficult involving steep mountains and walking on snow covered boulder fields.  On one night we came back to camp in darkness so profound I could not see my hands.  The horses just dropped their heads and walked a little slower.

The weather was a huge challenge.  I was once told a rams are killed two days after a big snowfall.  It snowed every other day about six inches.  We did not get a two day window until October 14.  The season closed on October 15.  That morning I said to my guide, Lee, we need to get on those horses and ride out butts off.  I left on my horse before Lee and was out about 200 yards when Lee started yelling at me from camp.  He went to a knob and glassed up the valley.  I returned to camp.  Lee said, “They are up in a high bowl on that mountain.  One of them is a thumper.  Let’s go.

After only an hour of riding we got to the mountain, climbed to the tree line and set up under the last tree.  There was not just one big ram.  There were two.  Lee told me which was the larger and helped me to settle in under a tree for the shot.

This is when capricious mountain winds delivered good luck.  We had waited for about an hour when the wind abruptly rotated 180 degrees.  I knew the ram would get up soon.  It only took about two minutes.  He got up and as the ram turned into the new breeze, Lee said, “Shoot him!”  It was a wonderful moment I will never forget.

I can tell you what to expect from Scott and his men.  Hard work.  Great skill.  Superior sportsmanship.  Gentle but powerful horses.  Great hunting.  Raw and beautiful wilderness. - And, oh yes, excellence. 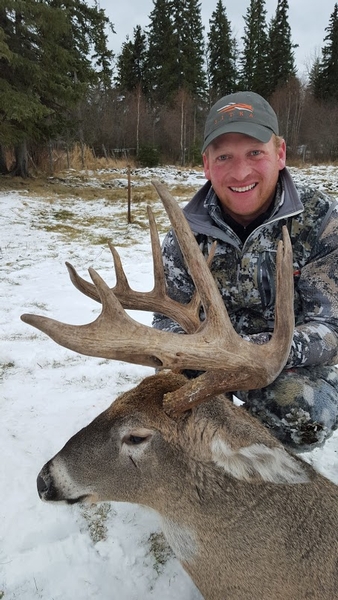 Scott Carter is without question the best and most professional guide and outfitter I’ve ever hunted with.  Scott will do everything in his power to make your hunt the most successful and enjoyable possible.  Scott is honest, trustworthy, and he represents the gold standard of professional outfitters.  I can’t recommend him highly enough. 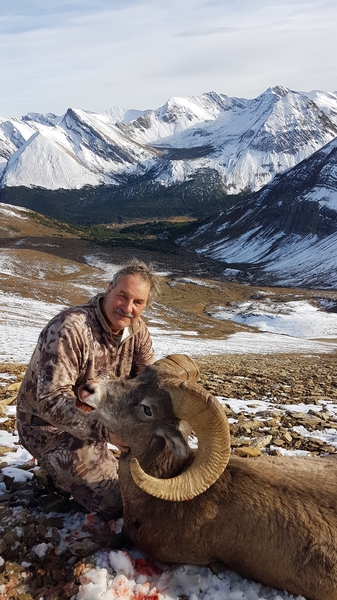 I hunted with Scott Carter and Carter Outfitting in the fall of 2018. This was the final leg in my quest for the Grand Slam of North American Bighorn Sheep. I can say from the first meeting, till the trip home, I could of not ask for more from that organization. Scott runs a family business and I mean that everyone in the family is involved and all great help. The country was awesome in its beautiful fall dress, the horses were first class and the game was plentiful. I would recommend anyone to Scott for an outstanding experience. And Yes I was blessed to get sheep number 4, a long journey but a great one.

I hunted Bighorn with Scott in 2014, 2016, and 2018 and was successful all three times, with two sheep in the 170's. He has a great area, remote, which makes it difficult for residents to hunt. His camps, horses and guides are good. I would hunt with Scott again. 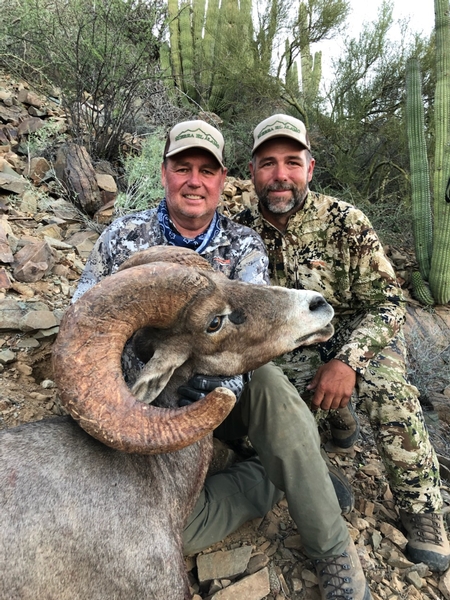 Scott has been with me for 2 of my 3 legs so far in the quest for my slam. My trip with him to Alberta for my Rocky was phenomenal. His trips are everything you want in the ultimate sheep hunt experience. He joined me in Mexico for my Desert. In conjunction with the Artee family, Scott was instrumental in creating another great hunting memory! 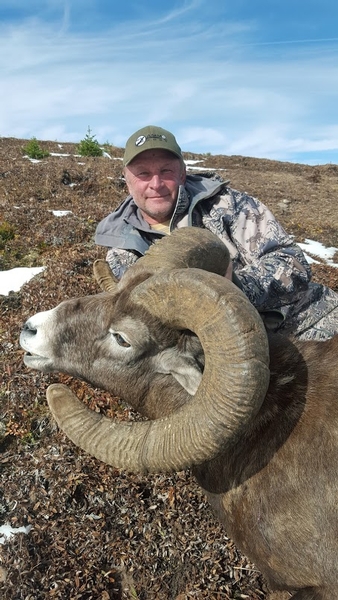 I have been hunting with Scott Carter now for about 6 years. We have 100% success rate together. Scott is a world-class Ram Hunter and a real cowboy. His areas have large populations of good Rams if you can hike and if you can shoot. There's no need to look elsewhere. Scott will get you your sheep!

Send us a Testimonial

To our past clients: We appreciate your comments and if you would, fill out the form with comments and a photo about your experience at Carter Outfitting LTD. Fields marked with * are required. Please enter the Name field how you want your name to read on our website (Examples: John Doe, J. Doe, John D., John Doe Corporation).